The cause of the Big Bang


The cause of the Big Bang

(Conservation Laws of the Universe)


The most accepted theory regarding the evolution of the universe posits a certain initial state and currently describes the presence of accelerated expansion [1]. However, the structure generating this expansive beginning is still under debate.

When considering such expansion, studies show that in the beginning, everything occupied a minimum volume. Thus, many analyses of this initial state associate it with the extreme densities present in black holes [2].

Although the use of relativity in most cases indicates the presence of an inner singularity [2], there are cases where this singularity may not be present in black holes classified as regular [3] [4].

The inequivalence of these cases, related to the fact that these structures do not contain all the mass and energy or all the constituents of the universe, may indicate that this comparison is not very effective.

Thus, a proposal that highlights the observation and application of important conservation laws is developed [5].

The universe can be considered to be the maximum region bounded by the presence of mass and energy or of the components of any formation [6]. Because the universe contains all existence at every moment, the total energy and motion are always conserved [7].

For the analysis of this conservation, a synthesis of the energies that may be present in the high and low density phases is proposed.

Because bosons, antimatter, quantization effects and dark matter may have arisen only after the beginning of expansion, the relativistic energy at rest (E 0) [8] is used to represent all the internal, quantum and structural energy interactions (such as atomic interactions) of any mass at rest

because when masses are dispersed by dissipation, it corresponds (by conservation) to an energy intensity equal to E 0 = + m 0 . c ² ,  represented by the wave propagation or linear momentum (p) energetically related by de Broglie relations [9] or to the increase in kinetic energy.

Gravitational energy (Eg), which is also considered to be a negative energy (binding energy), is related to the position of mass [10].

Kinetic energy (Ek), which is never negative, is related to the relative motion of mass or energy (such as waves) and thus to existing space [11].

The total energy of the universe (ET) is analyzed from the following perspective:

The universe does not freely expand because over its evolution, attractive or interacting forces always exist.

When an analysis begins in a state of greater concentration without a structure with massive characteristics, there is no gravitational energy or relativistic energy at rest (– E 0), and thus, the total energy (ET) is represented only by the maximum intensity kinetics exclusively from the motion of energy particles or waves ( E ² = ((m 0. c ² ) ² = 0) + p ² c ² ) [12]. Because this energy is not a binding energy with a high value, it does not correspond to a state of such intense contraction in a space, which tends to not exist.

Thus, before expansion begins, considering the analysis of a universe with massive characteristics is proposed to preserve the law of energy conservation.

In such a state, everything is compacted in a single point [2] [3], totally or infinitely contracted.

When considering a massive composition without a spatial presence, the existence of relative motion is not characterized, and this parameter is not preserved [13].

Thus, a massive state of the highest density necessitates the existence of a smallest possible space, which is related to a spatial dimension [length = 2. (Radius) = 2. R] and a temporal dimension, corresponding to conservation of motion, with centrifugation (inertia) justifying this tendency.

Centrifugation not only avoids but also promotes a singularity [14]. When considering a massive state (which occupies a place) of maximum density, one cannot have a null dimension. With maximum centrifugation (of the whole universe), there can be deformation, planarization and dispersion to a state of real maximum (one-dimensional spatial) contraction [15].

A given length can generate an infinitesimal volume, provided that the width and thickness are as small as possible.

Even being as small as possible, a space present in a spatial dimension would split all of existence into two parts or filaments (2 . R).

Minimal space results in minimal relative motion. In a state contracted to the maximum extent, for conservation of the quantity of motion (QT), the existing mass (m) must be maximal, with the concentration dispersed in an extensive and single spatial dimension, making the moment of inertia (I) maximal.

With QT proportional to (m. R. w) , even considering that the angular velocity (w) is almost null, the product is sufficient for conservation. The universe prior to the expansion, concentrated only in a single infinitesimal point without the presence of any space, does not conserve the total quantity of motion.

The total energy of the maximum contraction or concentration (ET maxc) is negative (bonding) with the maximum value of:

For the maximum gravitational energy, the masses that represent the two parts (with almost zero relative motion) must be equal in quantity.

However, for the existence of any infinitesimal space, the smallest possible part of one of these masses must be in a state of total dissipation.

Because of this difference, for maximum contraction before the expansive beginning, one of these structures – separated by the smallest central space – reaches a complete state in one spatial dimension, with the other still having an infinitesimal quantity of mass in two spatial dimensions, presenting another smaller space.

Because it is impossible to determine the smallest dissipated mass that generates the smallest space or the largest quantity of mass that existed in the universe in its state of greatest contraction, the following is considered:

(M 0 + M 0) = maximum total amount of mass in all existence, if spatial presence is not necessary.

(M 0 + m 0) = total mass if a single and smaller spatial presence is possible,

E = (M 0 – m 0). c ² = energy that represents the smallest presence of space or the smallest possible amount of mass dissipated in one spatial dimension.

For the instant of maximum concentration, the following presences are proposed:

1) Maximum gravitational energy between the two units or parts, which decreases only after the beginning of expansion.

2) Infinitesimal kinetic energy represented by the relative motion, which is the minimum of the approximation between the parts, in the smallest space existing at the last moment of contraction, which generates the beginning of an expansion.

In the transition from the maximum contraction to the beginning of expansion, the kinetic energy decreases as space approaches the minimum size. Because space cannot cease to exist, the kinetic energy does not become null [16] and intensifies greatly with the beginning of expansion because the gravitational energy and relativistic energy at rest decrease, conserving the total energy [7].

3) Relativistic energy at rest (E 0), which represents the interaction between the two massive halves that exist due to the presence of an infinitesimal central space.

Therefore, in the state of maximum concentration, when one-half of this quantity of mass is dissipated from the other, the energy at rest equals half of this equivalent.

The other energetic half of this quantity is the binding energy represented by gravity because the infinitesimal kinetic energy is related to the existence of infinitesimal spaces [11].

The presence of an infinitesimal space is caused by the minimum quantity of matter possible     (M 0 – m 0),  which is completely dissipated.

Because two infinitesimal spaces are present at maximum contraction, the kinetics can be represented by the energy: 2. (M 0 – m 0). c ² .

Thus, the total energy of a universal state of maximum contraction or concentration (ET maxc) can be represented by:

There is a positive energy (kinetic) representing an infinitesimal intensity of expansion in a state of maximum, but not complete, contraction.

Considering the current state of accelerated expansion, if all the possible mass that existed at the instant of maximum concentration were completely dissipated in the future, by having its energy summed with that of the infinitesimal spaces that existed, by conservation, we have the following total energy in the future instant of maximum expansion:

For a maximum expansion (ET maxd) that conserves the total energy, an infinitesimal gravitational energy and relativistic energy at rest, equivalent in value to the kinetic energy in the state of maximum contraction, must exist.

Thus, the total energy is conserved [7] in absolute value (intensity) by:

Thus, respecting the law of energy conservation, in its state of maximum expansion, the universe presents the minimum existence of mass.
Having mass and space, even if one or the other is infinitesimal [temperature (T) does not reach absolute zero], energy can never be used to perform the work of volume variation [17] [18] – the universe tends not to expand or dissipate completely but rather to a maximum.

To be equal, there can be no variation in the total entropy in the volume variation processes of the universe. The increases in entropy required for local thermal equilibrium can be compensated in phases or parts of the universe by constant variations in mass and energy quantity concentrations [19].

Thus, there are expansions followed by contractions of the same intensity.

the state number (Ω) = N (the number of possible states). P (the quantity of movements).

In the state of maximum expansion, the amount of movement and the number of possible states are limited by the energy (space created by waves) and is one spatial dimension (N and P are minimal, making S ≅ 0).


As there is always mass, energy and space in its composition, the contraction or dissipation of the Universe will never be total, but maximum.


An outline for Universal evolution is given as follows: 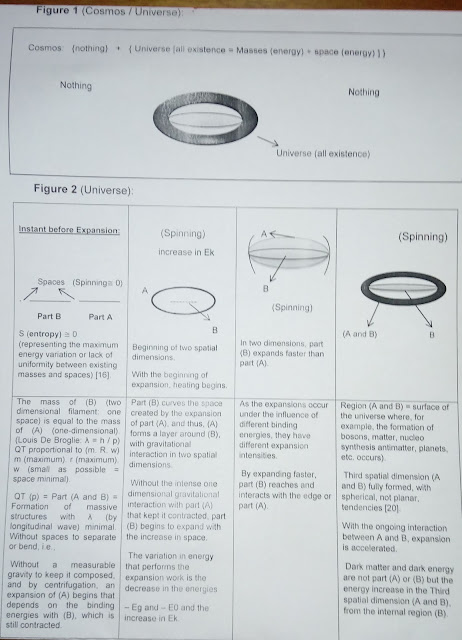 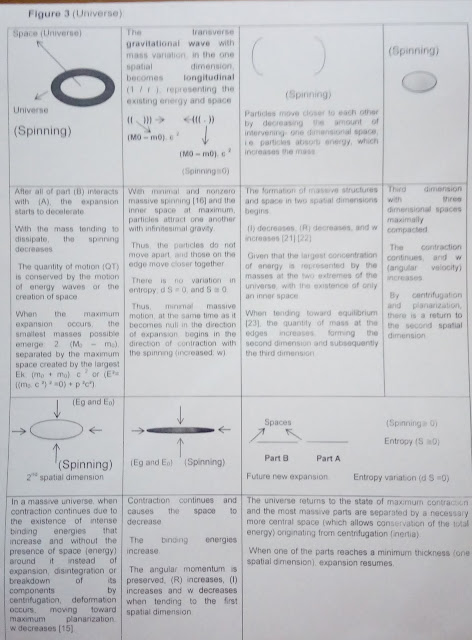 
All the parts of the universe are energetically related by the atomic interaction of its components (E0), the positions they occupy (Eg) and the motion (Ek) exerted.

In  the  proposal  to show  that  the  Universe  cannot  have  a  complete contraction  or  expansion,  but  have  a  maximum,  since   that  the  great existing  energies  are  dissipated  in massive filaments at maximum contraction, or in extensive space at maximum expansion, with almost null relative massive motions, in the comparison between these states:

the relativistic energy at rest (E0) was considered, and the typical use of certain relativistic calculations could be discarded [24] [25].

The current existence of the universe in motion already generates variation between the energies with a constant volume variation, always in the direction of thermodynamic equilibrium, which is never completely achieved. The total entropy variation is null [19] [26].

The variation in position, motion, mass quantity, energy and space, which generates work for expansion, is equivalent to the variation in Eg and E 0 when converted to Ek, and in contrast, in contraction, the total energy is conserved. In nature, nothing is created or lost; everything is transformed [27].

As any noticeable energy signal is absorbed at the beginning of each cycle, Olbers’ paradox can be disregarded [28].

This approach is finalized from the perspective of Occam’s razor [29] or the law of parsimony [30], where the best explanation should assume the smallest number of premises. However, new complementary studies are necessary.

[29] Captain Travis Patriquin, US Army. The Principle of the Occam Razor for facts. Military Review (2007).

The cause of the Big Bang (Conservation Laws of the Universe) | Preprint | Even3 Publicações: Abstract
In this proposal, arguments are discussed that reinforce the importance of the observation and application of laws, such as those governing the conservation of energy and of the total quantity of motion, to guide the development of models complementary to the Big Bang theory. By assuming that the universe contains all of existence at every moment and is thus an isolated system, the cosmos may contain a total amount of energy that is conserved throughout its evolution. Based on this idea, an equation is formulated to guide new suggestions.